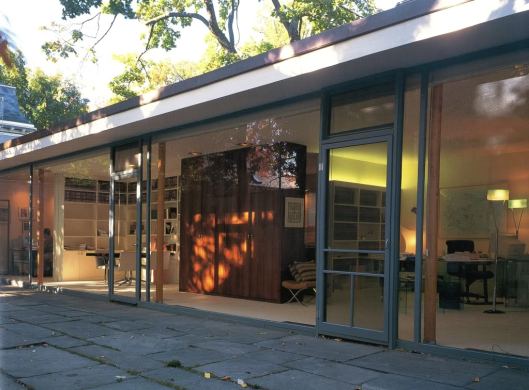 Before Philip Johnson’s Glass House (1947), there was his Harvard Graduate School of Design thesis project at 9 Ash Street (1942) in Cambridge, Massachusetts.  Not many graduate students actually produce their thesis beyond the blueprint stage, but then Johnson at thirty-five, having already served as co-curator of The International Style exhibit along with Henry-Russell Hitchcock at New York’s Museum of Modern Art, was not your average graduate student.

Both Ash Street and the Glass House reflect the International Style, particularly the Barcelona Pavilion (1929) by Johnson’s mentor Mies van der Rohe.  While Ash Street is a fully enclosed landscape and the Glass House is fully exposed, they are essentially a city and country version of similar aspirations: incorporating interior and exterior space.  While the Glass House is open to take advantage of the distant exterior landscape, it relies on the exclusive ownership of the   immediate landscape to retain its privacy.  The urban setting of Ash Street require its interior and exterior to be combined in one secluded space.  In both buildings the line between public and private are blurred.

What I like about Ash Street is its modesty, if not its hospitality.  While it does not open itself to the community, it does not make claim to property beyond its borders, which by neighborhood standards are indeed modest.  Both buildings are for no more than two (intimate) residents, so each have a certain appealing hedonistic quality that is not a part of the traditional residential dwelling. I’m not sure if the strongest relationship could survive either house, so single dwelling might be more apt.  If Ash Street is self-indulgent, it is also Spartan in its accouterments.  Its only luxury is its exclusiveness.  It does not advertise itself and is only conspicuous by its bold exclusivity.

The nine-foot wall that encloses both home and garden on Ash Street– which is two feet over the restricted building code– resemble nothing else in the neighborhood.  Across Ash Street is the traditional ivy-coated brick of Radcliffe College.  On another corner is the home of the late detective novelist Robert Parker: a decidedly un-modern and rather colorful Victorian that would be more at home in San Francisco.  One block down, on the corner of Ash and Brattle Streets, is the Arts and Crafts Shingled H. H. Richardson’s Stoughton House (1883).  You could walk the streets of the neighborhood for years and appreciate these more traditional landmarks, but number 9 would always remain a mystery.  As a self-contained world for one, I can see why word has not gotten out.

With the exception of the Glass House, Johnson never achieved the simplicity and beauty of 9 Ash Street.